Driving over one of the many new bridges in Egypt, part of a massive infrastructure investment programme, we saw a woman sweeping the road as cars sped by. I commented to my wife ‘that’s a dangerous job’. As we passed I saw she was sweeping with the brush in one hand, the other holding the hand of a small child she was trying to keep behind her out of the way of the oncoming traffic.  This image captures several aspects of Egypt’s development. Most obvious is the stark inequality between the privileged, like me, in our air-conditioned cars contrasted with woman and child working in high temperatures for a pittance. It also captures the lop-sided nature of Egypt’s development strategy – one which will not lead to sustained growth. 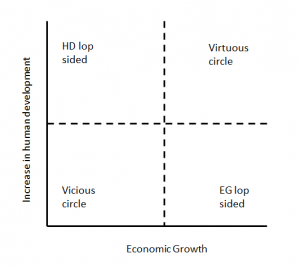 Except the analysis of Ranis et al shows that it doesn’t.

At the heart of this debate are different types of causal statement, which is why this blog is on the CEDIL website. The ‘human development follows income’ statement is based on the regression line, which has been the staple of causal statements in quantitative social sciences for many years (studies now need some credible way of handling possible endogeneity).  But Ranis et al. reclassify their data as dichotomous variables (high and low). As Gary Goertz and James Mahoney discuss in A Tale of Two Cultures, this is the way qualitative data are typically analyzed for causality. Causal analysis is then about necessary and sufficient conditions. The data they present are consistent with the statement that investing in human development is necessary (but not sufficient) to enjoy sustained growth. Whilst simply investing in economic growth eventually only leads back to stagnation.

Most successful recent examples come from Asia, especially East Asia e.g.  Vietnam. But another example is Bangladesh. In a study published in 2005 I documented how Bangladesh was an unsung human development success story. This would put the country in the top left quadrant of lop-sided human development. But since then the country has taken off into high rates of economic growth with dramatic reductions in its ‘aid dependence’.

This brings us back to Egypt. Whilst government strategy does pay some attention to health and education, they pall into insignificance compared to the infrastructure developments and efforts to attract foreign investment intended to drive economic growth. But, as I will describe in my next Letter from Egypt, the country faces a looming public health crisis on a massive scale, and public education is beset by low quality and corruption.  The first 1,000 days of a child’s life are vital. The child on the bridge will grow up permanently disadvantaged by the developmental deficiencies of his upbringing. It is easier for the army to build infrastructure than reform institutions or deliver social services. But history suggests this strategy is not sustainable.

And the World Bank has finally come around too. At the end of last year it launched the Human Capital Project which emphasizes the importance of human capital investments for sustained growth.

If you want to hear more about CEDIL join us at our one day event at the What Works Global Summit.

We use cookies to enable us to see how this website is being used. This helps us to ensure that the website is user-friendly, and that you’re able to access the information you need easily. Our cookies are stored locally on your device.